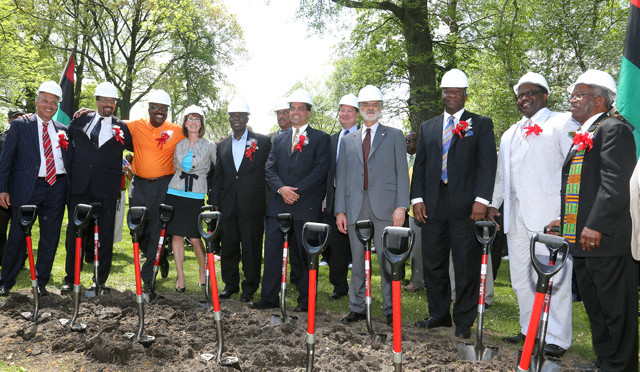 The African-American Cultural Gardens has been a staple in our community for a number of years. A Ground Breaking Ceremony recently took place to unveil the latest developments.

History of the Garden:

Many iconic leaders of our time have been memorialized in the Garden including: Abraham Lincoln, Artemus Ward and Booker T. Washington. The Garden then became a central place for racial conflict back during the 1960’s and the infamous Hough riots of that time. It was time to bring peace and unity…

A new beginning for the Garden:

The idea of a garden project to revitalize this space dates back to the 1970’s. Back in May, that dream and goal came to life when the African-American Cultural Gardens project in Rockefeller Park kicked-off. Mayor Frank Jackson and a host of other Civic Leaders came together to celebrate phase 1 of the more than 2 million dollar project.

A Garden with a purpose:

The African-American community is more than 53% of Cleveland’s total population, according to a latest census. Cuyahoga Community College Professor Booker Tall had a huge role in launching this development to continue to make the community whole. Overall, the purpose of this world-famous Garden is to advocate peace and unity, qualities always needed in any situation. The Mayor designed a team to raise money, make progress and further encourage the community to get involved. He was quoted saying : ” It’s really an honor for me to help (Tall’s ) dream come true.”

And what a dream come true it was!

The goal is to have the entire project done in time for next year’s 100th Anniversary of the Cultural Gardens, with only 1.75 million dollars still needed for its completion.