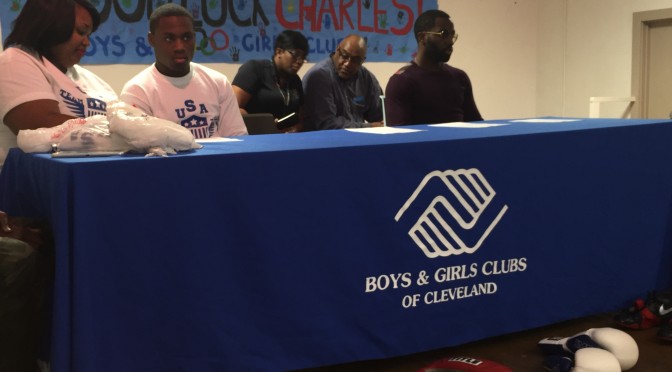 Charles Conwell, who grew up in Cleveland’s King-Kennedy Estates has now developed into one of the most promising young fighters in the United States.

Charles started boxing at 11 years old, his father was the first one to introduce him into the sport.  Four of his eight siblings were boxers – super heavyweight Marlon Steen, sisters Tyree and Tiarra Conwell and active middleweight Isaiah Steen.  They call themselves Team Tuff (Tightly United Family Fighters) Boxing Academy.

Charles, who was originally coached by his father, Chuck Conwell, has learned discipline and hard work and that’s why he has the work ethic that he does today.  There were times where his father would wake him up at one or two o’clock in the morning to run or train, and Charles would wake up with no hesitation to give it his all.

Now fast forward to today, Charles has accumulated a very impressive amateur record, including a National Junior Olympics title in 2013 and, at age 17, a National Golden Gloves Championship in his first time competing.

Charles recently beat four fighters in his division at the U.S. Olympic Team Trials for boxing in Reno, Nevada, which materialized into a 2016 Olympic berth for the young fighter.  Now Charles will be heading to the Olympic Training Facility in Colorado Springs, Colorado to train.

To qualify for the 2016 Summer Olympics in Rio de Janeiro, Brazil, Charles will need a high finish in only one of three upcoming international boxing tournaments.

Charles’ mother remembers something her son said after he got hooked on boxing.

“I’m not stopping until I make the Olympics” she recalled him saying.

With that goal being so close in reach now, Annette Steen-Conwell shares her feelings on her son having a chance to compete in the 2016 Summer Olympics.

“It’s extremely exciting, I never would have thought that something from me would have made it that far, but, I’m not limited in what God can do for him.”

With the support of his family, friends, the Boys & Girls Clubs and the City of Cleveland, Charles will be in great hands representing his hometown and his country on a national stage this summer in the Olympics!