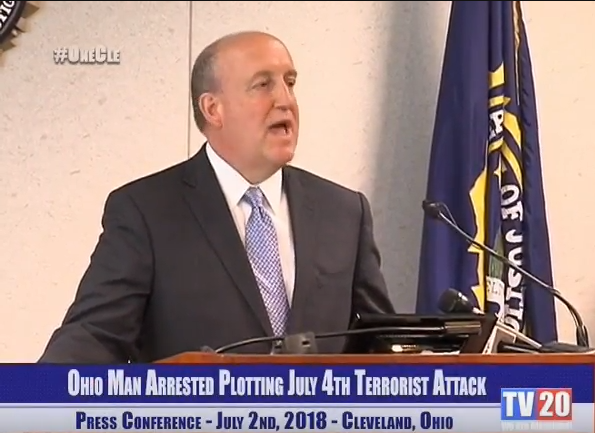 A special press conference was held today at the Cleveland division FBI headquarters to announce the successful prevention of a potential terrorist attack for July 4th.

Today, the Joint Terrorism Task Force announced the arrest of Demetrius Nathaniel Pitts for attempting to provide material support to a foreign terrorist organization. In 2017, the FBI received a tip regarding Pitts’ alleged support of Al-Qaeda along with reported threats of violence against government entities. Pitts had an extensive criminal history, including felonious assault, domestic violence, aggravated robbery, and carrying a concealed weapon. In May of this year, Pitts relocated to the Cleveland area, where his threats of violence continued via his Facebook account. Pitts divulged to an undercover agent his intent to utilize explosives during the Fourth of July, with Voinovich Park and the US Coastguard Station being targets of interest.  Pitts was arrested this past weekend.

If you believe you have information about a potential criminal or terrorist plot in the Cuyahoga County area, you are urged to contact the Crime Stoppers at 216-252-7463 or visit their website at 25Crime.com