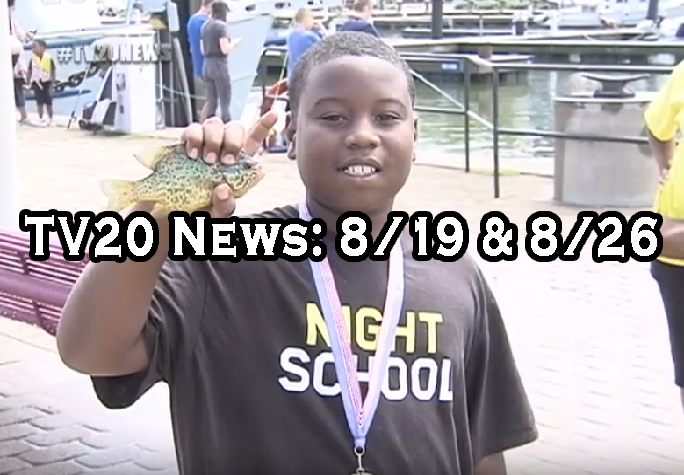 Be sure to subscribe to TV20’s official Youtube channel to stay up to date on all things Cleveland!

The Public Safety Career Pipeline Summer Program for young men and women came to a close with a celebration in Cleveland City Hall. Mayor Frank Jackson congratulated them on the work they did and hoped they consider public service as a career.

Downtown Cleveland Alliance held their annual “Kids Fish CLE for Free” event at Voinovich Park. The Cleveland Division of police was on hand to work with the kids on how to get the most fun out of fishing.

Mayor Frank G. Jackson’s Youth Summit and Back to School Fair was back at Cleveland Public Auditorium for its thirteenth year. Mayor Jackson kicked off the event with a welcome speech and acknowledging the students.

What happens when young men age out of foster care?  Some go on to have successful lives, but others need a bit of help, especially with housing, and for that they find Gregory Jones. What Mr. Jones created was a place for young men to stay once foster care ends.

It was a grand day for a parade as people lined up along Fulton Avenue showing off their Puerto Rican pride. The parade ended at Roberto Clemente Park where they were welcomed by Cleveland Mayor Frank Jackson

The Cleveland Public Library is celebrating its 150th Anniversary this year! To celebrate, CPL hosted a free block party on Superior Avenue that included games from Tech Central, performances throughout the day, kids activities, ice cream from Mitchell’s and a Ferris wheel.

The outdoor space at Glenville Resource and Recreation Center just got a little more colorful thanks to a partnership between Kent State’s Cleveland Design Collaborative and local students. Urban Designer Katie Slusher tells us about the pilot program.

Mayor Frank Jackson was recently interviewed by Jaden Jefferson, a 6th grader from Toledo that has received national attention as a multi-media journalist and Anchor. Afterwards, the tables got turned on him when Chief of Communications, Government and International Affairs for the City of Cleveland Valarie McCall interviewed him.

Young boys and girls had a chance to learn about all the opportunities available to them at a forum put on by Poise Entertainment called the “You Can Do It” Youth Career Expo. Poise Entertainment CEO Dr. Jerome Smith tells us more about the program.