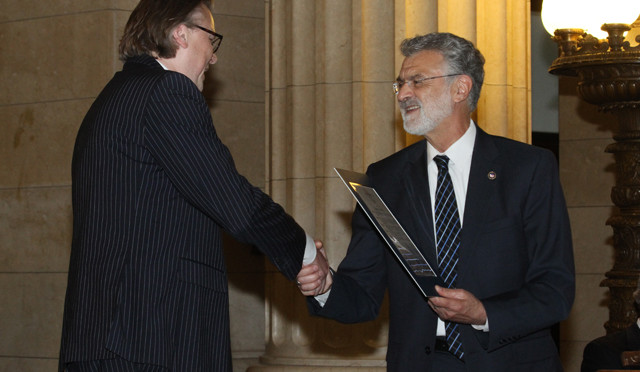 Below is a complete listing of what is airing this week on TV20: We Are Cleveland and our Weekly News Wrap Up Video:

The Weekly News Wrap Up

In a landmark ruling from the U.S. Supreme Court, it is now legal in all 50 states for anyone, no matter their gender or sexual orientation to marry the people they love. To honor this achievement, members of Cleveland City Council joined Ohio Senator Sherrod Brown and dozens of supporters and community leaders on the steps of Cleveland City Hall, to celebrate this remarkable moment in history.

ONE LIFE, ONE VOICE

In Cuyahoga County, ten out of every one thousand babies born each year do not get to celebrate their first birthday. This is an issue all of our communities face but is three-times more likely to happen to African-American babies. The One Life, One Voice, One Community Event was recently held at the Cleveland Convention Center to raise awareness and offer individuals with information to support a healthy baby, life and city.

At the Cleveland Division of Fire Promotions Ceremony eleven well deserving men were sworn in to their new ranks as Captains and Lieutenants. The Oath of Office was administered by the Honorable Mayor Frank Jackson.

IN THE NEIGHBORHOOD WITH MUNI COURT

The “In the Neighborhood” with Muni Court event was held at Mount Gillion Church to give men and woman the opportunity to begin to wipe their records clean of traffic violations and other non-violent misdemeanor offenses.

Over seventy-thousand refugees come to the United States every year, with hundreds relocating to Northeast Ohio. These refugees have made a lasting, positive impact on Cleveland in different areas such as medicine, science and art. June 20th was declared World Refugee Day and to commemorate it here in our community, government officials and notable film makers gathered at the Beck Center for the Arts to call attention to the unbelievable economic impact and social influences that these individuals have made.

The city recently announced a seven hundred thousand dollar grant to kick-off the final round of land acquisitions needed to complete the next segment of the highly anticipated Towpath Trail. Money will help trigger the final construction of stage three of the trail, which will pass through the industrial portion of the city’s flats, extending north from the Steelyard Commons shopping center to University Road at Literary Avenue in Tremont. A press conference was held to discuss the further plans and what still needs to be done.

Representatives from various Slovenian organizations joined Mayor Frank Jackson in the City Hall Rotunda to celebrate the 24th Annual Slovenian Statehood Day, and the individuals who have made a difference.

The 4th Annual Vintage Police Vehicle Show was held at the Justice Center Plaza. The show was a blast from crime fighting past, as visitors got the chance to see old-time cars as well as new ones from the Cuyahoga Sheriff’s Department, the Cleveland Police Department and the Ohio State Patrol.

Families recently came out for the Fishing Foundation Annual “Fishing with Dad” event at Rockefeller Park. The foundation was founded in 2010 with a mission to enrich individual lives through the sport of fishing.

Launched in 1970, The National Youth Sports Program at Case Western Reserve University exemplifies the University’s commitment to improving the quality of life for others in the community by providing a five-week summer camp experience that offers sports activities, education, nutrition and health services to more than 500 economically disadvantaged Greater Cleveland youth age 10 to 16 each year.

At the Cleveland Division of Fire Promotions Ceremony eleven well deserving men were sworn in to their new ranks as Captains and Lieutenants. The Oath of Office was administered by the Honorable Mayor Frank Jackson.

Host Leah Haslage sat down with Stacey Talley, Director of Look Up to Cleveland to discuss the organization and its future plans.

Host Errol Porter sat down with two guests to discuss how to avoid internet scams.

A Promotional Ceremony recently took place at the City Council Chambers to swear-in three groups of the Cleveland Division of Police to their new ranks as Captains, Lieutenants and Sergeants. The Oath of Office was administered by the Honorable Mayor Frank Jackson.

Learn about the history and opportunities offered at the Cleveland Public Library with TV20 Reporter Leah Haslage.

The Brain Machine:  A doctor is taken hostage by a drug smuggler whom she has diagnosed as psychotic. Her estranged husband has to find her before the smuggling gang find him and kill them both (1955).