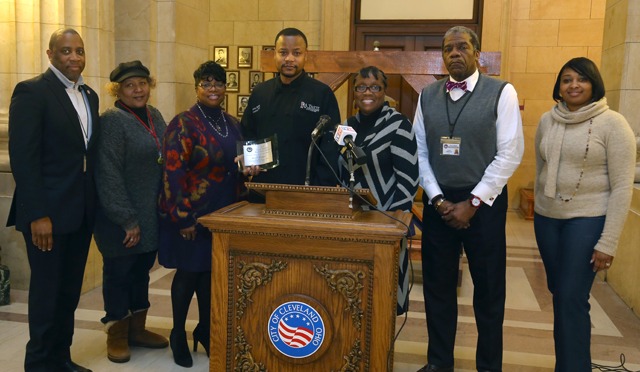 Here is a full listing of what will be airing this week on TV20: We Are Cleveland!

Who’s Who in Black Cleveland:

The 10th Annual “Who’s Who in Black Cleveland” Event was held at the Inter-Continental Hotel, giving tribute to those who have left a legacy and to recognize current influential men and women in our city.

Black History Month and the Future of Radio:

To celebrate Black History Month, as well as the history and future of radio, an event was held at the New Bridge Cleveland Center, and featured a panel discussion with two long-time African American media personalities.

The City of Cleveland continued to celebrate Black History Month with the “We Are in Good Hands” A Taste of Culinary Arts Event held at the City Hall Rotunda. The Black History Month Committee presented Chef Donte Hodge, from “A Taste of Excellence Catering” with a plaque for his outstanding works in culinary arts.

Cleveland’s historical Public Auditorium has seen many amazing, talented artists come through its doors and grace the stages. We spoke with Mike Taylor, stage manager for Public Hall, about one room that keeps the memories preserved.

The City of Cleveland is excited to announce that the Cleveland Kennel is now open to the public on Sundays from 12:00p.m. to 2:00p.m. Chief Animal Control Officer Ed Jamison stated, “I feel very confident that the added access to the dogs in the kennel will definitely help reunite more lost dogs with their families as well as increase adoption opportunities. This is another step forward for the animals in Cleveland.” Cleveland Kennel is located at 2690 West 7th street in Cleveland and is open to the public Monday through Saturday 10:00a.m. to 3:00p.m, and Sundays from 12:00 to 2:00p.m.

Earth Fest is the longest running Earth Day Celebration in the Nation, and is also Ohio’s largest environmental education event. This year it will be on Sunday, April 19th once again at the Berea Fairgrounds. The Earth Day coalition has partnered with Mayor Jackson’s Sustainable Cleveland 2019 Initiative for the event and will celebrate the Year of Clean Water.

It may be chilly outside, but there are still plenty of fun events to attend and activities to do! Make sure to visit our TV20 blog and bulletin board for updates.

Wizard World Comic Con, the 3-day event that brings together fans of comic books, movies and all things pop culture, finally made its way to the Cleveland Convention Center!

The 41st Annual Black History Flag Raising Ceremony took place on the steps of Cleveland’s City Hall Rotunda, and featured many African-American leaders in our Community who joined together to kick-off the month-long celebration with music, worship, and unity.

All The Way With RTA

Councilman Zach Reed was joined by other City Leaders to present Kahlid Samad, who is the Chief Executive Officer of the Peace in the Hood Incorporation with a proclamation for his 40 years of continued service in our City.

Reduction in the Use of Force Press Conference

Mayor Frank Jackson addressed the public on the decline in the use of force by the Cleveland Police Department and what other steps are being taken.

Monsters From Green Hell: A scientific expedition in Africa investigates wasps that have been exposed to radiation and mutated into giant, killing monsters (1957).

Off the Hook Wrestling

To watch these programs right from your computer, click on the “watch now” tab above! As always, stay tuned to TV20 for the latest happening in Cleveland!