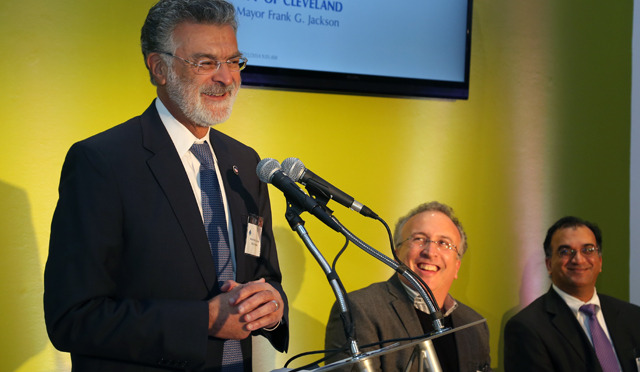 We are closing further in on the Holiday Season here in Cleveland! There are always plenty of stories to make ourselves aware of, and here is a list of some of those that made the cut this week!

The City of Cleveland and One Community installed the Nation’s first commercially available Metropolitan 100 Gigabit Network! At a Press Conference, Mayor Frank Jackson and other Local Officials spoke on how this new addition will help Cleveland become a City of choice.

The Director of Economic Development was also in attendance and touched further on the importance of what this will bring to our Community.

A Press Conference was held at the Rock and Roll Hall of Fame and Museum by Mayor Frank Jackson and the Health Resources and Services Administration. The goal of this Conference was to discuss and provide tips for the public on the up-coming open enrollment period of the Health Insurance Marketplace.

Councilman Joe Cimperman was also there and spoke more about the importance of the Affordable Care Act for our City and how Clevelanders should know more about the process.

For more information, you can also visit: http://www.hrsa.gov

A Ribbon Cutting Ceremony was held at Crooked River, to showcase its new skate park, which has been highly anticipated by the Community. Mayor Frank Jackson was joined by other City Officials, as well as children to cut the ribbon on this new landmark addition!

CEO of the Cleveland Metroparks, Brian Zimmerman, also provided the audience with information on why this utilizing this space is so important.

An active shooter class was held at the home of TV20: Public Auditorium for City of Cleveland employee’s. The mission of this class was to help inform them on how to be prepared, with tips from local Law Enforcement, in case an unfortunate event were to strike here in Cleveland. We here at TV20 also took part in the class to learn more and become further educated!

Detective Joe Billups was among the many there and spoke to the crowd more about situations where Clevelanders may find themselves face to face with harm and the necessary steps to take.