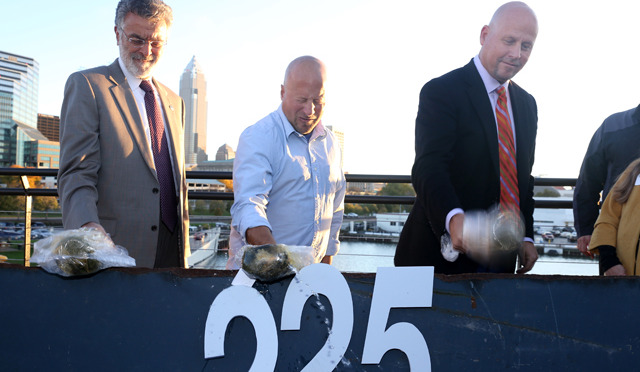 Happy November! The Holiday’s are right around the corner, it is amazing how fast 2014 has flown by! Here is a few of the stories featured in our Weekly-News-Wrap-Up this week! As always, stay tuned to TV20 for the latest!!

The shattering of Champagne bottles marked the completion of renovations to Barge 225!! It was a celebration of many sorts, and such a great event and new beginning for our City. The software company, LeanDog and ARRAS Kealth-ley Advertising debuted their latest addition!

Mayor Jackson was joined by Community members, long time visitors, and many more to christen this new ship along our beautiful Lake Erie Shoreline! It was a plan that was long in the making, but has now finally taken off! Jon Stahl and Jim Hickey, spoke on what influenced 225 and how it all came to be what it is today!

October is Down Syndrome Awareness Month, and to bring light to the topic, an event was held at City Hall Rotunda to celebrate and raise awareness. The event also honored key individuals in our area for their efforts in doing these things.  City Council President Kevin Kelley was joined by other local advocates to praise the Organization “The Up Side of Downs” for all of their efforts as well, in this fight to bring the issue to light.

The Executive Director of the organization, Toni Mullee, was in attendance and spoke about the importance of getting Clevelanders involved on the on-going fight. A parent whose child is living with the condition also gave his take on what is like  everyday, but also shared hope and inspiration!

The 2014 Annual Disability Awareness Luncheon was held at The City Hall Rotunda, and included awards given to representatives from many important groups throughout the area, The event’s purpose was to help people better understand different conditions one lives with, and how it affects the person and their family.

The key-note speaker was Associate Director of the Emergency Services at the American Red Cross, Michelene Holland. She further touched on the importance of coming together to raise awareness for those who have disabilities. The event wanted to also let men and woman know that they are not alone in the battle! It is crucial to stay educated and informed, this event helped Community members do just that!

Diwali is the kick-off of the new year in the Indian culture! The Festival of Lights kick-off celebration, presented by FICA (The Federation of India Community Association), took place at the City Hall Rotunda.

You may be wondering what exactly The Festival of Lights is. There are many hear-say stories, but it is the beginning of India’s new year and also is a celebration of good over evil, which is very important in the Indian culture. Mayor Frank Jackson, along with the members of FICA came together to give praise and thanks to the Indian Community for their diverse contributions to our great City!  President of FICA, Asim Datta was there, and spoke further on the importance of Diwali, and what it means to him to have Cleveland’s support!