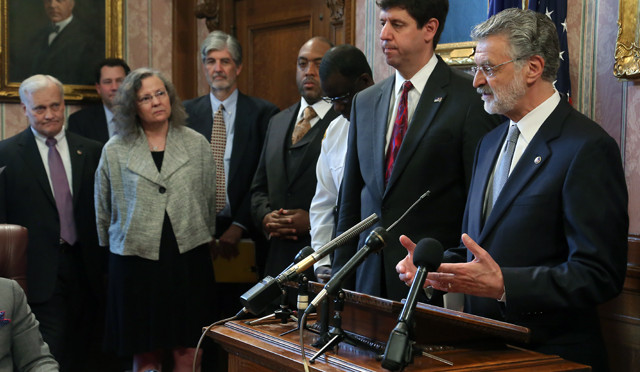 There are always fun events to do in the City of Cleveland and below you can see a list of some of those that we have covered, along with our Weekly News Wrap Up video.

The City of Cleveland reached a settlement agreement with the Department of Justice on police reform. The announcement was made at a Press Conference held at City Hall on May 25th with Mayor Frank Jackson, U.S. Attorney Steve Dettlebach along with other leaders discussing the transformative changes to come.

The American Constitution Society believes that law should be a force to improve the lives of all people. ACS works for positive change by shaping debate on important legal and constitutional issues through promotion and development of high-impact ideas to opinion leaders and the media. The group recently held an event at the City Club of Cleveland, honoring Mayor Frank Jackson as the recipient of the 2015 Congresswoman Stephanie Tubbs Jones Public Service Award, for all of his dedication to our city.

The Community Assessment and Treatment Services in Cleveland is a substance abuse rehabilitation center which offers men and woman comprehensive, residential and outpatient recovery services. They recently held their 3rd Annual Total Wellness and Education Fair, to inform individuals on the importance of maintaining healthy lifestyles.

The City of Cleveland held an open house at the Cleveland Water Pollution Environmental Health Center to educate children on the different departments in our city, to teach them sustainable tools and to Celebrate the 2015 theme: Community Begins Here.

Clevelanders are striving for new efficient ways to stay cool in the summer and warm in the winter, and now unconventional options are coming out of the box- literally. Ward 15 Councilman, Matt Zone was joined by members of the Detroit Shoreway Community Development and Citizens Bank to unveil this new tiny house concept in Cleveland’s own Eco Village, which will provide more affordable living options for our community.

A Community Resource Fair, sponsored by Ward 7 Councilman, T.J. Dow was recently held at Thurgood Marshall Recreation Center. The purpose of the event was to connect residents with the city and county services they need, which include: safety, health, education and employment.

The James H. Walker Construction Management Course is a ten week, twenty session program. The course is taught by experienced construction professionals and includes a wide variety of topics such as education, marketing and estimating, as well as learning how to become certified with the city of Cleveland, obtain financing, and more. The most recent class of graduates was honored at a ceremony held at the City Hall Rotunda.

The Delta Alpha Lambda Chapter of Alpha Phi Alpha Fraternity Incorporated has been very instrumental in the Cleveland community.  Not only do they mentor students, sponsor chess tournaments and give out scholarships for college.  They also take it upon themselves to educate the youth and lead them down the right path.

May is Asian- Pacific Heritage Month and is a time to celebrate the Asian and Pacific islanders in the United States. Mayor Frank Jackson and community leaders gathered at the City Hall Rotunda to celebrate and to honor the men and woman who have made long-lasting contributions in their culture right here in Cleveland.

If you’re headed Downtown to check out any of these events, or to simply get to work, be aware that resurfacing of West 3rd Street from Superior to Lakeside Avenue is underway. During this project one Northbound and Southbound lane of traffic will be maintained. There will be a second phase to this project that will be announced soon. You will still be able to access all businesses and residences, but on-street parking is not permitted. Both phases are scheduled to be complete by the middle of August.

The 24th Annual American Rib Cook-Off and Music Festival is a Memorial Day weekend tradition that has something for everyone, and is the perfect unofficial start to grilling season and summer. The Marc’s amateur competition also took place, giving participants three racks of ribs and two and a half hours to create an award-winning barbecue masterpiece. After the smoke cleared, the professional grill masters sampled the slabs to determine the 2015 champion. The Annual Event takes place at the Jacobs Pavilion at Nautica, but it isn’t the first place this competition and rib cook off has been held.

The Lutheran Hospital project broke ground back in 2013, at a cost of approximately 17.5 million dollars. The new features now include a more prominent entrance, 21 private rooms, and new patient beds. Over the past five years, the annual number of patients receiving treatment has reached 2,000. Cleveland Clinic Officials and community leaders gathered to celebrate the completed expansion of this new emergency department.

News from different events around Cleveland.

Since 1996, City Year Cleveland has had a profound and powerful influence on the lives of thousands of children. More than thirteen hundred corporation members have graduated from City Year Cleveland delivering over 2 million hours of service. The 19th Annual Rock the Red Jacket Gala was a celebration of those members who rock red every day to change the lives of the students they serve.

The Union Miles Development Corporation has a mission to improve the quality of life in the union-miles neighborhood through community organizing, housing, and economic development. The Union Miles Agriculture and Green Landscaping Incubator is a program designed to meet this goal, and the first class of graduates were recently awarded at a ceremony, honoring them for all of their hard work.

St. John’s Church, located in Ohio City is one of the oldest in the state, and has been a spiritual home to mayors, senators, and captains of industries, but its real significance is serving as a home to those without power or prestige. All of these efforts became known as “Station of Hope”, a temporary refuge for those seeking freedom along the underground railroad. The community collaborated with the friends of St. John’s Group in 2013 to bring the once vacant space back to life. Through that partnership, “Station of Hope” has breathed new life in to Ohio City, as we witnessed recently at an event held at the church.

The 26th Annual Senior Day Event, presented by the Cleveland Department of Aging took place at Public Auditorium. The theme for this year was “Get Into the Act,” which allows men and woman to voice their opinions on the needs of the growing population of seniors in America. Mayor Frank Jackson was joined by other City Leaders for a celebration filled with music, performances and fun.

Cinco De Mayo is celebrated annually and commemorates the victory of the Mexican Militia over the French Army at the battle of Puebla in 1862. There is limited recognition of the holiday throughout other countries, but it is honored here in the United States, where there is a significant Mexican population. Mayor Frank Jackson was joined by other community members at the City Hall Rotunda, for a festive day filled with culture, music, unique costumes, and more.

Destination Moon:  One of the first science fiction films to attempt a high level of accurate technical detail tells the story of the first trip to the moon (1950).