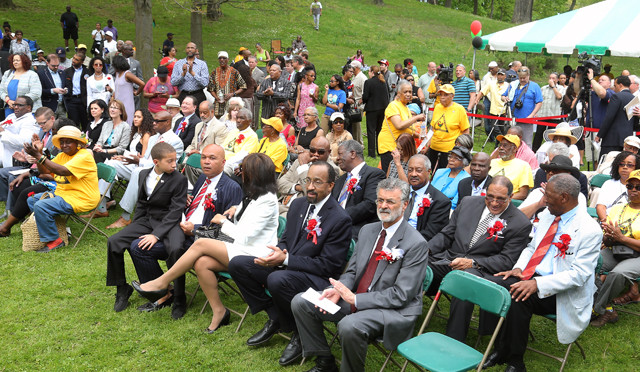 Below you can see what is airing all this week on TV20: We Are Cleveland!

St. John’s Church, located in Ohio City is one of the oldest in the state, and has been a spiritual home to Mayors, Senators, and captains of industries, but its real significance is serving as a home to those without power or prestige. All of these efforts became known as “Station of Hope”, a temporary refuge for those seeking freedom along the underground railroad. The community collaborated with the Friends of St. John’s group in 2013 to bring the once vacant space back to life. Through that partnership, “Station of Hope” has breathed new life in to Ohio City, as we witnessed recently at an event held at the church.

After years of planning, the African-American cultural garden project in Rockefeller Park is finally underway. The over-all purpose of the gardens is to promote peace and understanding throughout our community, and give a sense of history. Mayor Frank Jackson was joined by a host of Civic Leaders for a Ceremonial Groundbreaking of Phase One of the 2 million dollar project.

By assisting in the funding and design of signage and the rehabilitation of storefront buildings, the City of Cleveland’s Storefront Renovation Program helps neighborhood districts become more attractive, economically viable and diverse places to visit and shop. The program is in its 20th year and recently held their Annual Awards Ceremony at the Music Box Supper Club to honor the individuals who have helped our city continue to thrive.

On April 17th pieces of the National City Building fell on to E. 6th street, crushing a van but luckily no citizens. But a vehicle isn’t the only thing to be damaged from the incident independent businesses along W.6th has been feeling it too thanks to the partial road closure and scaffolding hanging over the sidewalks, making it seem as if the shops are closed. Cleveland’s Department of Economic Development, along with many partners including Councilman Joe Cimperman, created a way to lure customers back to the businesses with a week-long lunch mob.

Mr. Robert L. Davis, a utilities professional with over 28 years of experience, was recently sworn in as the Director of Public Utilities for the City of Cleveland by the Honorable Mayor Frank Jackson.

The Union Miles Development Corporation has a mission to improve the quality of life in the Union-Miles neighborhood through community organizing, housing, and economic development. The Union Miles Agriculture and Green Landscaping Incubator is a program designed to meet this goal, and the first class of graduates were recently awarded at a ceremony, honoring them for all of their hard work.

For a lot of people, going to a four-year college seems like an automatic choice when they graduate from high school. The reason is obvious, more income.  But college isn’t for everyone; picking up a trade may be a better option for some. TV20 took you to the Hone Barber College to learn more about this unique opportunity.

The Cleveland Water Department recently held an open house at the Garrett Morgan Water Treatment Plant to celebrate National Drinking Water Week. Over two thousand visitors had a chance to see the water treatment process from start to finish, showing how water goes from Lake Erie to your home.

OPERATION SAVE A LIFE

Operation Save-A-Life was created back in 1992, in partnership with the American Red Cross, when Cleveland was experiencing a rise in deaths due to home fires. The goal of the program is to reduce fire deaths in the Greater Cleveland area by installing smoke alarms and batteries to vulnerable populations. Cleveland firefighters and American Red Cross members gathered at West 80th and West 83rd street around the Detroit Avenue area to help promote fire safety.

Mayor Frank G. Jackson held a Press Conference Regarding the Comprehensive and Transformative Settlement Agreement on Police Reform with Department of Justice

Host Errol Porter sat down with Joshua Bias, a member of the Office of Fair Housing and Consumer Affairs to discuss tips and procedures when hiring a contractor for needs around your home.

Host Justine Greenwald gets up close and personal with Mary Ann Lorient – Film Producer and Director of Rachel’s 9th Inning.

Understanding Medicare and the wide array of options available for Clevelanders.

Understanding social security, its benefits and ways to avoid costly mistakes that can be made.