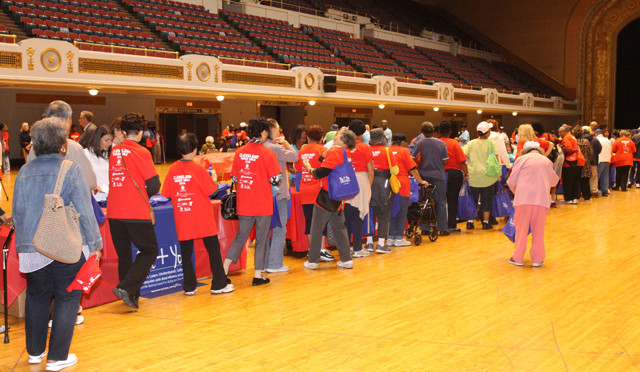 Walking for a cause! It is always great to see people in our community coming together under the same united front. Many seniors came out to Cleveland’s Public Auditorium to get moving, get motivated, and to get educated! There were also free health screenings available. Moondog and Sir CC from the Cleveland Cavaliers joined Mayor Frank Jackson, along with other local officials to kick-off this 10th Annual Event. There was also a moment of silence for the victim’s of the 9/11 tragedy, as well as their families.

Adults 65 and older are at the greatest risk for Influenza- related complications, and in extreme cases, even death. To help familiarize those people who fit into that category about the dangers of the flu and the importance of receiving an annual vaccination, The Cleveland Department of Aging and the Western Reserve Area Agency on Aging teamed up with the National Council on Aging’s Flu + You program. The main priority in doing this was to give seniors information about flu and vaccine options in our area.

It is vital for older adults to get vaccinated earlier in the flu season, as a study showed that early vaccination is associated with greater benefit compared to later on in the season, or not at all. It was said at the event that last year, only 53% of seniors got their flu shot, which is barely half. This walk is held every year in hopes of changing that. In its 10th year, it had a great turn-out!

According to the Centers For Disease Control and Prevention, adults do have vaccine options, including a vaccine specifically made for adults aged 65 and older to improve the body’s production against the flu. Each year in the United States, seniors typically account for more than half (about 60 percent) of flu-related hospitalizations and almost all (90 percent) of flu-related deaths. As part of the partnership between the Cleveland Department of Aging and the Western Reserve Area Agency on Aging, the purpose was to reach out to older adults and senior service providers at the Flu + You table. Here is some additional information on Flu + You for those who might not be familiar. It is also good to make note that the elderly are also at risk of infecting not only themselves, but also their loved ones, more especially infants.

As we get older, our immune system typically weakens. This generally makes it harder for us to fight off diseases and may even make us less responsive to vaccines. As a result of that, adults over the age of 65 are at an increased risk of the flu and its complications. The flu is easily transmitted from person to person through coughing, sneezing, or through contact with fluids from an infected person’s nose or mouth. It is important to note that the flu can be especially dangerous for people with chronic conditions, such as diabetes and heart disease. It takes approximately two weeks following immunization to produce a protective immune response.

This event proved to be a success, as more and more adults returned. They made sure to do a stretching routine before hand, with Moondog leading the way. The seniors walked laps around Public Auditorium in unison, some even dancing along to the music! Collinwood’s Marching Band also made an appearance to help pump up the crowd.

Learning more about the flu and how to prevent it is crucial as we will soon find ourselves entering flu season! For more information regarding the flu, you can visit flu + you’s official website at www.ncoa.org. For information on the Cleveland Department of Aging, you can visit the City of Cleveland’s Official website at www.city.cleveland.oh.us. You could also call them at 216-664-2832 with additional questions.

Make sure to stay tuned to TV20, as we will be running this story and many others that impact our community and its people.

Flu + You, The Cleveland Department of Aging