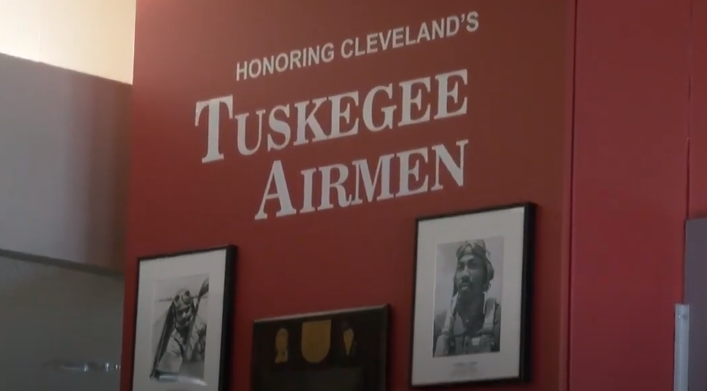 The City of Cleveland and Cleveland Hopkins International Airport commemorate Benjamin Davis & the Tuskegee Airmen with a plaque designed by Cleveland students.

On Friday, June 4, 2021, students from Cleveland Metropolitan School District’s Davis Aerospace and Maritime School unveiled their plaque in honor of Benjamin O. Davis, and all Tuskegee Airmen from the Cleveland, Ohio area.

General Davis is remembered for being the first African American U.S. Air Force General. He served in the United States armed forces for nearly 40 years – taking part in World War 2, the Korean War, and the Vietnam War. General Davis retired from his military career in 1970 and passed away in 2002. He is interred at Arlington National Cemetery.

“Our mission is to produce some of the finest character in young men and women that we can. It was no mistake that we we’re honored to name our high school after General Benjamin O. Davis Jr.”

Commemorated alongside General Davis were the Tuskegee Airmen – the unofficial name for African American military pilots of the second World War. Throughout World War 2 the United States military remained racially segregated, however, many African American’s still wished to serve their country. Following a Congressional law, Funding was set aside to train prospective African American pilots at civilian institutes – including the then named Tuskegee Institute.

“Our students continue to face many obstacles on the path to their own success. But by learning and embodying the spirit of the Tuskegee Airmen – they too will overcome and achieve incredible feats.”

Commissioned by Mayor Frank G. Jackson, the plaque was not only researched by the student’s of Davis Aerospace and Maritime School – but designed as well. Laila Graham, a senior at Davis, brought the project to life by meticulously etching patches, labels, and text for the plaque – utilizing a laser cutter available at the school.

The plaque is currently on display in Cleveland Hopkins International Airport across from the Welcome Center.