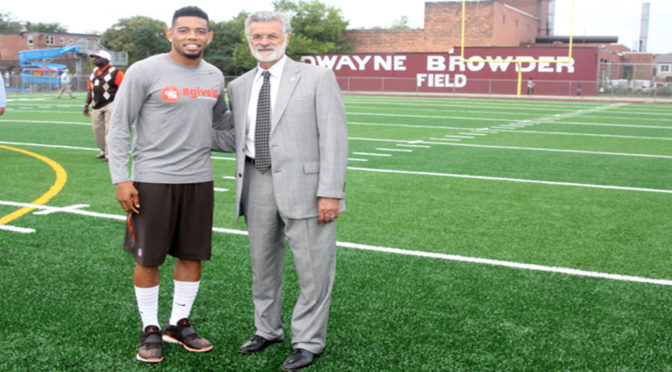 The renovations  replaced the natural grass field with a new, state of the art, synthetic turf, full-sized football field! This upgrade will further extend the season and usage of the field and will also reduce the cost of maintenance for the City of Cleveland.

The project was a collaborative effort funded by the Cleveland Browns with a $200,000 grant given from the NFL Foundation Grassroots Program. The Burten, Bell & Carr Development Corporation also played a part by working with the City and the Browns on the project. First Energy Stadium is currently working to install a sport lighting system for the new field as well.

The Director of Public Works for the City, Michael Cox stated that “The project has been and will continue to stand in tribute to what we can do in partnership to provide safe, appealing spaces for our children to learn, grow and play.”

The field is named for Dwayne Browder, a long-time Cleveland MUNY Football League coach and community leader, and is a focal point for youth sports in Cleveland’s Central neighborhood. The field will serve as a home for the Cleveland MUNY Football League’s Phil Cullum Renegades. East Technical High School will also be using this field. The Re-dedication ceremony concluded with a surprise visit by a player from the Browns, Joe Haden who spoke with the kids, cheerleaders and uniformed athletes rushing onto the newly renovated field….ready to play.