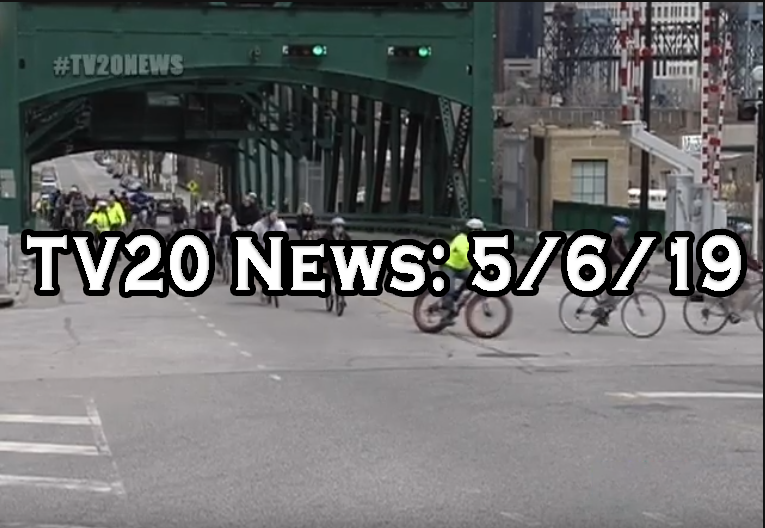 Here are the stories in this week’s episode of TV20 News.

Muny Courts “In the Neighborhood” Program (1:00)

People with unresolved misdemeanors, back fines and traffic violation issues had a chance to meet with Public Defenders and the staffs from juvenile court and child support to help figure out a better way forward. Payment plans could also be set up if needed, and court dates could also be scheduled at numerous suburban courts that may be closer.

The City of Cleveland kicked off their partnership with the U.S. Census Bureau for the 2020 Census. In his remarks, Mayor Frank Jackson spoke about the challenges census workers will face collecting information.

The iconic Song of Whales mural on the Cleveland Public Power building was created by the Artist Wyland in 1997. He was recently back in Cleveland at the Davis Aerospace and Maritime School to kick off the 8th Annual Mayor’s Challenge for Water Conservation and to make a big announcement…that he’ll be back in June to repaint and restore the mural to celebrate Cuyahoga 50!

The City of Cleveland recently threw a big celebration, honoring all women in the Military. The celebration was held in the rotunda of Cleveland City Hall. The Keynote speaker, and one of the honorees, was Janie Mines, the first African American Woman to graduate from the U.S. Naval Academy.

The City of Cleveland’s Women’s History Month Committee recognized 15 female employees at their annual award ceremony. The theme for this year’s luncheon was Women Becoming Cleveland’s Next Generation Leaders and was inspired by former First Lady Michelle Obama’s best-selling book.

Men from the Cleveland Area came to the Cleveland Clinic to learn more about their health and how they can live better lives. We sent TV20 special correspondent Errol Porter to the 2019 Minority Men’s Health Fair.

Now that spring is here it’s time to get out and get active! To celebrate, the Cleveland Metroparks, along with local and national partners, hosted a Trail Season Opening Day event at Merwin’s Wharf. Ward 3 Councilman Kerry McCormack discussed the connection between the trails and the community.

Spring is here and it’s time to take your bicycles out of storage and get them ready for riding.  Here’s TV20 Special Correspondent Errol Porter with a story on Cleveland’s bike trails.

The Mayor’s Office of Capital Projects held their annual egg drop competition as a way to raise money for Harvest for Hunger. Employees from various departments throughout City Hall teamed up to create the perfect vessel to protect their egg as it dropped to the ground from the second floor.

The First District Community Relations and the Bellaire-Puritas CDC hosted their annual Egg Hunt at Fogary Hall. Families got to enjoy food, photos with the Easter Bunny and get information on local organizations.