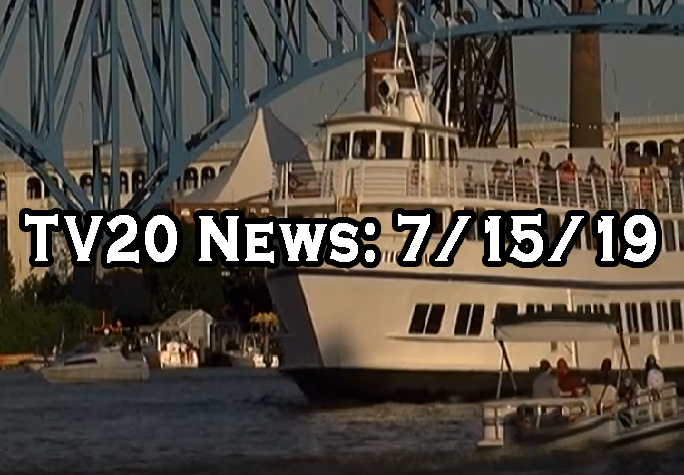 Welcome back for another episode of TV20 News. Don’t forget to subscribe to TV20’s official Youtube channel to stay up to date on all things Cleveland!

To commemorate the 50th anniversary of the Cuyahoga River Fire, the River Network hosted their yearly River Rally Conference here in Cleveland. Conservationists and activists from across the country met at Cleveland’s Westin Hotel for an evening of brainstorming.

The Northeast Ohio Regional Sewer District, Canalway Partners, State and local officials, residents and regional organizations had a lot to celebrate at Settlers Landing with the Unveiling of the new Superior Avenue Pump Station and the Phase 4 Groundbreaking of the Towpath Trail during Cuyahoga 50 week.

Also to celebrate the big Cuyahoga 50 week, an anniversary event was held at Rivergate Park. The event included speeches from Mayor Frank Jackson, Chief of the Office of Sustainability Matt Gray and local and regional environmental leaders.

Residents, Activists, state and local officials came together at the Huntington Convention Center in downtown Cleveland to discuss the lead crisis at the inaugural Lead Safe Summit hosted by United Way of Greater Cleveland and the Lead Safe Cleveland Coalition.

Spectrum hosted their Community Impact Day at Thurgood Marshall Recreation Center. Rahman Khan, VP of Community Impact for Spectrum, and Ward 7 Councilman Basheer Jones tell us about the event and why Cleveland.

Soldiers and Sailors New Names Added to Roll of Honor (14:54)

In a solemn ceremony held inside the Soldiers and Sailors Monument at Public Square, 107 new names were added to the Roll of Honor. As all of the names of the newly found heroes were read, it is important to understand who they are and where they all came from.

The Cuyahoga County Fatherhood Initiative held their 15th annual Fatherhood conference. Two segments comprised the bulk of the conference.  The first was the Town Hall Meeting where a panel of experts took questions from the audience and spoke about the rights men have as fathers.

It was a glamorous affair for the 14th Annual “Who’s Who in Black Cleveland” book unveiling ceremony. Mayor Frank Jackson welcomed everyone to the event and commended the publishers for the work they do. Before the book cover was unveiled, Human and Civil Rights Activist Reverend Doctor Otis Moss, Jr. was presented with the groups Lifetime Achievement Award.

Thousands came out to enjoy the annual celebration of food music and learn about the environment. Joanette Romero of Cleveland Public Utilities says that money raised from the Festival will help maintain the quality of Lake Erie, which is the source of Cleveland Drinking Water.

Camp George Forbes on the City’s east side hosted an all-day event for girls from the various recreation centers as part of their Trauma Prevention Program. TV20 Special Correspondent Kai Love spoke with the girls and program leaders to find out why events like this are so important.