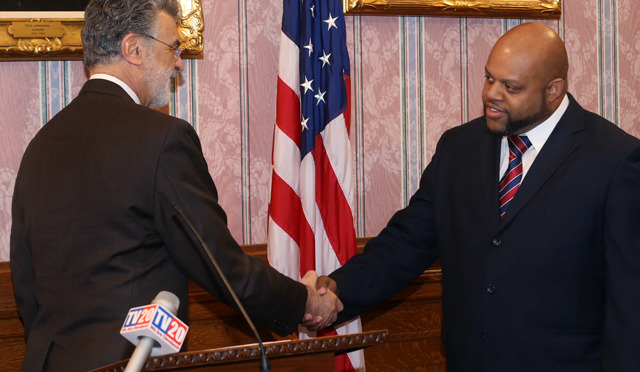 Below is a complete listing of what is airing this week on TV20 with a video of our Weekly-News-Wrap-Up in its entirety!

The Department of Housing and Urban Development recently recognized Cleveland as one of nine cities to get the Jobs Plus Grant, a grant that will help increase employment here in Cleveland. Mayor Frank Jackson and other City Leaders gathered at Outhwaite Community Center for the big announcement.

Medicare is a type of health insurance for those over the age of 65. But there are a few different kinds of Medicare, which can make things confusing to those who are unfamiliar with the process. To make things a little easier, the Ohio Department of Insurance in conjunction with the Department of Aging hosted the Welcome to Medicare event at the Cleveland food bank to help educate and inform seniors on the different Medicare options available.

The Rock and Roll Hall of Fame Induction Ceremony was back in Cleveland this year and not only that, the museum is Celebrating its 20th Anniversary!! A Press Conference was held at the hall to kick-off Cleveland Rock Week, the 10 day long festivities leading up to the big Induction Ceremony.

For the past thirteen years the Union Miles Development Corporation has celebrated the accomplishments of those in their community and what people have to look forward to in the future with their annual fundraiser event. Community involvement and growing our neighborhoods were a main focus this year, and why the work that UMDC does is so important for our City.

The Department of Public Utilities has a new Chief of Human Resources. Hernando Harge was recently sworn-in to his new position by the Honorable Mayor Frank Jackson.

The America Scores Cleveland Program is a tri-curricular program that teaches students physical activities, creative expression and teamwork. They host a poetry slam that takes place each fall, and this year two CMSD students have been chosen to recite their winning poems at the National Poetry Contest held at Times Square. The event was held at the Third Federal Savings and Loans Bank, where Ward 12 Councilman Anthony Brancatelli surprised them with a proclamation.

The City of Cleveland Department of Recreation received a special surprise from the Browns! A Terrance West autographed helmet was raffled off to a well-deserving student who participated in the special drawing.

Public Square isn’t the only spot getting a makeover right now. The St. Clair Avenue resurfacing project is underway. St. Clair Avenue from Ontario Street to west 9th has one Eastbound and one Westbound traffic lane being maintained on the south side of the roadway for the remainder of this project. No detour is expected and all side streets are available for businesses and residences. It is scheduled for completion by August. Phase two of the West 25th Street resurfacing project will be taking place from Meyer Avenue to Columbus Road. The project also includes asphalt roadway removal and replacement from I-71 to Detroit Avenue and is expected to be completed by the fall.

The First Amendment to the Memorandum of Understanding, regarding community benefits and inclusion was recently signed by Mayor Frank Jackson and other City Officials to help further the education of students in the Cleveland Metropolitan School District.

March is Women’s History Month and to celebrate a kick-off event was held by the Community Relations Board at the City Hall Rotunda. The event honored women who have gone above and beyond in Cleveland.

The People’s University: A Look Inside The Cleveland Public Library

Learn about the history and opportunities offered at the Cleveland Public Library.

School and City Officials gathered at Cleveland State University’s Ballroom for the Higher Education Compact Dashboard Event, which included the 2014 report to the community and strategies to further students’ success.

Showcasing Job listings throughout the City of Cleveland

Today’s Band: Bobby Kravos and the Boys in the Band

The Day the Earth Caught Fire: When the USA and Russia test atomic bombs at the same time, it knocks the Earth out its orbit and sends it spiraling toward the Sun (1961).