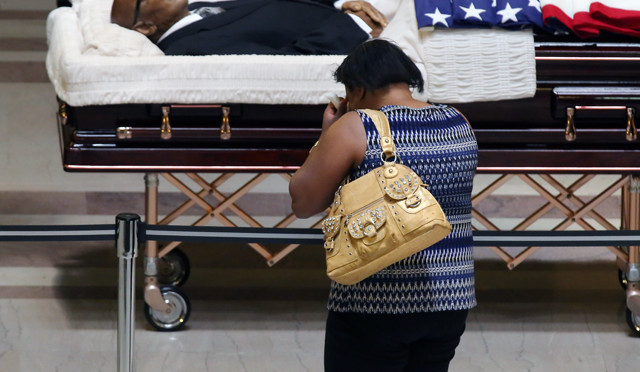 You can see what is airing this week on TV20 by following along with our weekly schedule and our Weekly-News-Wrap-Up in its entirety:

A viewing and tribute ceremony for former Congressman Louis Stokes was held at Cleveland City Hall…thousands came to pay respect to the man who impacted their lives.

After an internal investigation within the Cleveland Fire Department, it was determined that various policies on secondary employment were violated by numerous firefighters.  Fire Chief Patrick Kelley held a press conference on the investigation.

A Press Conference was recently held by City of Cleveland Police Chief, Calvin Williams to announce the issuing of charge letters to the officers involved in the deadly November 2012 police chase.

Metro Health Hospital is about to start a $1.2 dollar transformation, beginning with their critical care pavilion. The 85-rooms in it will be private for surgical and ICU and include two rooms specifically for disease containment, such as Ebola cases. To kick off the start of the project, community leaders and attendees were invited to sign a beam that will be used in the construction.

After serving nearly 40 years in public service, formerly as Commissioner of Cleveland Hopkins International Airport, Frank Szabo has been sworn in as the new Acting Director of Port Control for the city of Cleveland. Mayor Frank Jackson then administered the Oath of Office to Frank Williams as the new Interim Commissioner of the Division of Streets.

The first portion of the Cleveland Foundation Centennial Trail has opened! The trail is part of the Cleveland Metroparks Cuyahoga-Lake Link, a new network of trails and bridges that connects the river to the lake.

The Oath of Office was administered to the Cleveland Metropolitan School District’s newly appointed members to the board of education… just in time for the new academic year.

Back to school is an exciting time of the year.  Kids are embarking on a new journey in life, and parents are helping them prepare for what’s ahead.  For most kids, a fresh haircut is on the list of essentials of what they need to begin school.  Thanks to Cleveland radio personality Sam Sylk and the Hone Barber College, kids received free haircuts for the first day of school!

After having served the past 21 years in public service, most recently for the City’s Department of Economic Development, Anthony Thornton has retired. To thank him, Mayor Frank Jackson presented him with a proclamation for his years of service.

Ward 7 Councilman T.J. Dow and the E.M.S Rams partnered together to host a Community Event to bring out hundreds of families from across the community for a day filled with education, food and fun.

FEAST OF THE ASSUMPTION

People from all over filled the streets of Little Italy for the 117th Annual Feast of the Assumption!

Celebrating the life and times of the Honorable Louis Stokes.

Learn how the Cleveland Metroparks offer year-round fun at Edgewater Park and Beach! Then we’ll head over to Jacob’s Pavilion at Nautica to see how Brewing and beer culture is growing in our city at the 3rd Annual World Beer Festival!

The 47th Annual Puerto Rican Parade and Festival was recently held and started at East 13th street and ended at the Muni Lot. Thousands of men and woman from in and around the community gathered together for a day full of rich culture and history, local vendors, food and much more. Groups and organizations from the Greater Cleveland area participated including the Cleveland Division of Police.

Today’s Guest: Director of Law for the City of Cleveland, Barbara Langhenry.

Hot Rod Girl:  After his kid brother is killed in a street race, a champion drag-racer quits racing. However, a new kid comes to town determined to force him back into racing so he can take his title–and he’s already taken his girlfriend (1956).