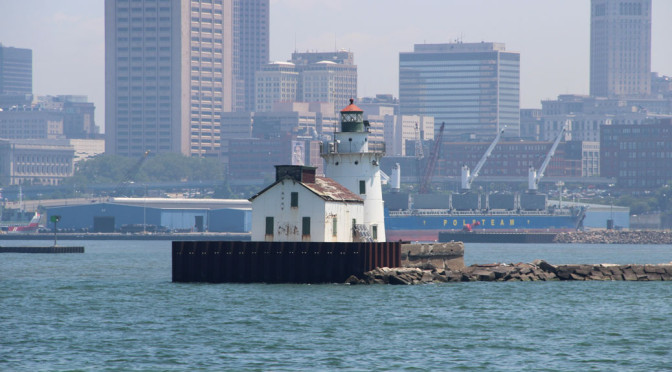 By: Catrina Leone   Cleveland is such a beautiful city and has just added another important staple. 53 new transient docks were created in the harbor’s basin directly behind the Rock Hall. To celebrate this new Marina, also known as Rock and Dock, a ribbon cutting ceremony was held. Mayor Frank Jackson, Port Control Director, Ricky Smith, Council President Kevin Kelley, along with Councilman Joe Cimperman were there to commemorate this new beginning.

Rock and Dock is such an exciting addition to our City! Boaters traveling the Great Lakes can dock for the day or stop by for a few hours during their lake adventures. Rock & Dock will also provide kayaking, jet ski rentals, and paddle boats for all you water enthusiasts. The marina is part of the Downtown Lakefront Plan and Cleveland’s committment to revitalize the city’s waterfront. Ricky Smith had this to say about the new marina, “Our vision for the lakefront includes development of lakefront as well as programmed special events and water activities. We are excited to be partnering with JIT Services to introduce new exciting water activities to lakefront visitors.”

Besides providing a safe and secure docking area, the new marina will also be providing water, restrooms, electricity, showers, and laundry. This will meet the needs of the future of North Coast Harbor and bring more visitors to the Pier and Downtown Cleveland. With summer already in full swing, the North Coast Harbor is full of activities that will help Clevelanders become even more engaged with the place where our city meets the lake. Many free events have been planned to help enhance the harbor during the season, including North Coast Namaste, a free yoga series, and Lunch by the Lake, which is a Thursday afternoon food-truck meet up.

“Where the city Meets the Lake” is a great, fun, and exciting experience to take part in. Rock and Dock at North Coast Harbor is open daily from 9am-7pm. For boaters who dock at the marina, you will be in perfect walking distance from all the amazing downtown attractions, which include the Rock n Roll Hall of Fame and Museum, First Energy Stadium, the Horseshoe Casino, and the Great Lakes Science Center.

To see the full ribbon cutting ceremony of the new Transient Marina, stay tuned to TV20. For those looking to reserve dock ships or for more information about this new addition, you can visit Rock and Dock’s website at www.rockanddock.com **All pictures provided by William Rieter**